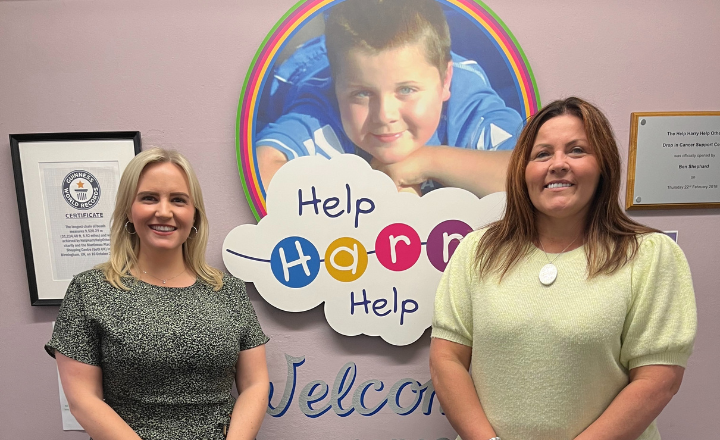 We are delighted to say that we have now raised over £11,000 as part of its ongoing support for Help Harry Help Others (HHHO), a Birmingham charity that offers direct and practical support to those affected by cancer.

Open Study College has been supporting the much-loved charity since 2017 and the vital donations have helped aid its fantastic work and HHHO support services, including the daily running of the drop-in cancer support centre, which provides over 900 families with a safe and supportive space to visit.

Help Harry Help Others became a registered charity in September 2012, and was founded by Georgie Moseley, following the passing of her son Harry. Despite fighting an inoperable brain tumour, Harry raised over £750,000 for cancer research in the last two years of his life, before he passed away on 8th October 2011, aged just 11 years old.

Georgie was frustrated by the lack of support in the community for families affected by cancer, and so set about making Harry's campaign, 'Help Harry Help Others' a charity structured around where her family knew more support was needed.

In 2018, Georgie launched Birmingham’s first drop-in cancer support centre, a unique service of its kind, offering over 20 services to support families in every aspect outside of treatment, from mental wellbeing to finances and housing. To date, the charity has helped over 1500 families and in 2019, HHHO reached the milestone of £1 million in donations.

Founder and CEO, Georgie Moseley, said: “A huge thank you to the team at Open Study College for their continued support for Help Harry Help Others. Ongoing relationships with local organisations like Open Study College are so important to the charity. Their amazing donations mean we can keep providing much-needed support to those who need it. In a year that marks the 10th anniversary of the charity, alongside the current cost of living crisis, ensuring we can support cancer patients and their families feels more important than ever.”

Samantha Rutter, CEO at Open Study College, said: “Harry’s cause is one that’s extremely close to our hearts. We truly admire the brilliant work that Help Harry Help Others does to support families in their time of need which is why we’ve continued to support in any way that we can.”