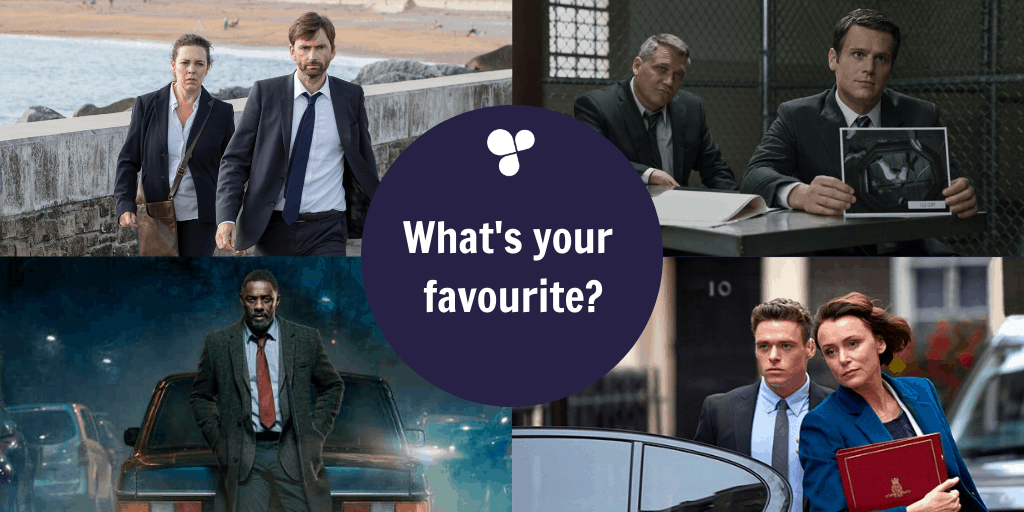 Crime related TV programmes and films are becoming more and more popular each year.  There is no doubt that we all like to pretend we are detectives in some way or another and we just can’t get enough of crime related programmes at the moment! There’s a reason why Cluedo is such a popular family board game!

Before we delve into our top crime series, did you know we offer a number of criminology courses for those who fancy delving into a career in solving crime?

We think these are the top crime series around. Did we miss any out?

This is probably one of the best detective based crime thrillers of all time, and not just because Idris Elba stars as detective John Luther, it’s a gripping watch too! Luther pushes boundaries by blurring the lines between right and wrong to uncover the truth.

We’re not giving anything away but the fact that Luther will also break laws so he can get to the bottom of the crimes, makes it a very interesting watch!

What makes Line of Duty so interesting is that it explores the world of police corruption. It is effectively the police, investigating the police.

The story follows Steve Arnott, a Detective Sergeant who refuses to cover-up the shooting of an innocent man and exposes the dirty underside of the British Police.

A war veteran turned bodyguard, from the get go this incredible series has us hooked. It follows the story of David Budd who gets assigned to serve as home secretary Julia Montague’s personal bodyguard.

Apart from the fact that David Madden is the starring role, it explores interesting themes such as terrorism and psychological war scars.

Probably one of the most fascinating out of the pick, Mindhunter delves into the psychology behind criminals, in particular, serial killers. Based on a true story, it follows the story of two FBI agents interviewing and exploring the psychology of horrendous criminals and shows how the FBI’s Behavioural Science Unit actually came to exist!

If you’re interested in criminology and what is truly going on in the minds of criminals, you need to give this a watch!

Broadchurch is a classic ‘who done it’ murder mystery investigation series that just gripped the nation when it first came out. When the body of a local boy is found off a cliff in a seaside town, the close knit community is shook. As two detectives try and uncover the truth, the breakdown of the family and friends of the victim around is shown!

A classic Netflix documentary series, this explores one of
the most notorious serial killers. It gets behind the mind of Ted Bundy and
makes a very intriguing watch!

This is arguably the truest to real life series on this list
because it actually is recording 24 hours in a real life police station! It
doesn’t dramatise it in the way a Netflix docuseries would. It uncovers what
really happens after someone is arrested and the hard work the officers go
through, in collecting evidence to try and convict the criminal they have
arrested.

Which is your favourite on the list? Did we leave any out?